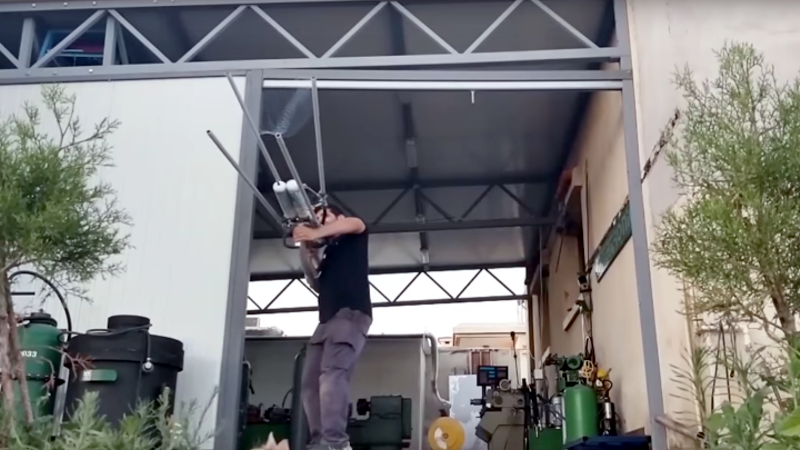 Who hasn’t had the experience of a pesky drone buzzing around that family picnic, or hovering over a suburban backyard where bikini-clad daughters are trying to sunbathe in peace? A shotgun used to suffice for such occasions, but with this compressed-air powered drone catcher, there’s no need to worry about illegally discharging a firearm to secure some privacy.

Before the comment line lights up with outrage, the above scenarios are presented entirely in jest. We do not condone the use of force on a drone, nor do we look favorably on those who use drones in a way that even hints at an invasion of privacy. We can all get along, and even though we hope [Make It Extreme]’s anti-drone gun will never be used in anger, it’s still a neat build that gives us lots of ideas. The rig is essentially four coaxial narrow-bore compressed-air cannon, each launching a slug attached to the corner of a lightweight net. A fairly complex set of linkages sets the spread of the barrels, and a pair of old oxygen tanks serve as reservoirs for the compressed air. A fast-acting dump valve is tripped by an interesting trigger mechanism mounted to a complicated stock and grip; we’d have liked to see more on the fabrication of that bit. The video below shows a test firing that results in a clean takedown of a drone, although we doubt the owner of the quad would characterize it as such.