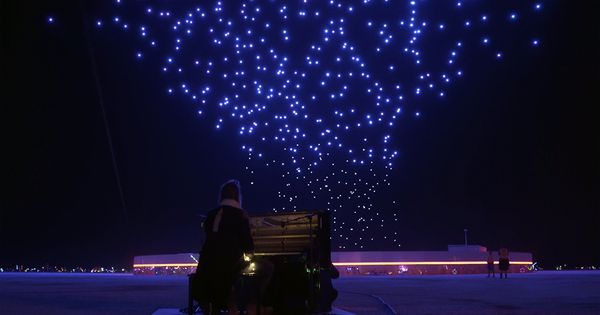 SOURCE:http://www.govtech.com/products/Drones-Continue-to-Find-Work-in-Ohio.html
The drone display at Burning Man 2018 was inspired by the flight patterns of starlings. (Photo: Ruprecht Studios via Vimeo)

An autonomous flying swarm of 300 illuminated drones took to the evening sky above Burning Man last week, throwing the more than 70,000 people in attendance into awed silence. Set to live music by Dutch composer and pianist Joep Beving, the art piece, dubbed “Franchise Freedom,” was based off the murmuration patterns of starlings.

“Franchise Freedom is inspired by the spectacle of starlings clustering together in massive swarms flying through the sky in thousands,” Studio Drift commented on their website. “They create breathtaking aerial displays that are seemingly rehearsed, but are in fact natural cohesions of movement and flight. Each maneuver is completely integrated, and no bird works alone. When swarming they are powerful and dominate the sky.”

To pull off the hypnotic grace of Franchise Freedom, Studio Drift studied and translated the patterns of starlings into a software algorithm that’s embedded in each drone. Artists Lonneke Gordijn and Ralph…