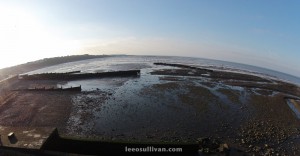 Lee O’Sullivan does a nice job of capturing photos with his DJI Phantom Vision 2 of Hampton Beach in Kent.

These two photos are the first and only (so far) photos that I have been able to take along the coast.  These were taken on a small beach as the tide was out.  The beach is called Hampton and it is situated in between Whitstable and Herne Bay in Kent.

I would of liked of taken more photos and also taken some video footage, but the wind was stronger than I thought and the drone was getting blown about more than I would like, so I decided to land before anything went wrong.

As soon as I managed t take these two coastal photos, I quickly landed again.  I’m glad I did land when I did as the wind got stronger on my walk back to the car.  I’m hoping to get more aerial photo and video of the Kent coastline in the future.  It will probable be in the Spring/Summer months when the wind eases, and probably in the early mornings when there are less people around.

The post First photos at the beach with DJI Phantom Vision 2 appeared first on Lee OSullivan Aerial videos and photos.