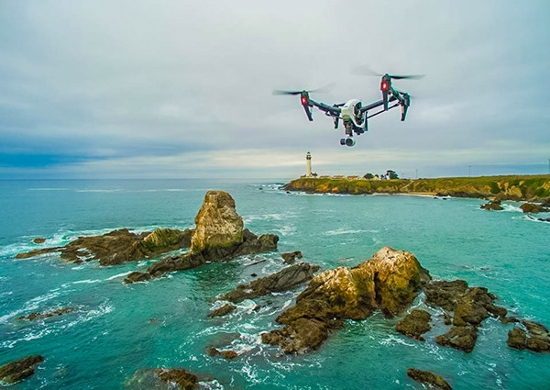 Drone cinematography is becoming common.  One only has to scan through the list of Section 333 exemptions to understand drones are growing in popularity

The footage was shot by videographer and Adobe community professional Jeff Foster, (including a few shots from Johnson), from small DJI-based quadcopter drones, either carrying a GoPro or a built-in camera. The “free” improvised music is pared with scenic moments along the northern part of the California coast and inland areas. The audio recording is the palette painting the aerial video segments that incorporate high and low-altitude drone footage. Foster believes that the aerial footage captured from these small drones gives one the feeling of flying like a bird from a vantage point you can’t get with any other method, whether from the ground, a helicopter or small aircraft.

“I wanted to use this particular track because of its fluid movement and unconventional approach to vocal music,” said Foster. “The album, Form & Formless, was striking to me because it incorporates both free improvisation and jazz classics. I can say with some certainty that this is the very first published jazz music video using 100% aerial drone footage.” The music created a storyline that Foster felt reflected the imagery of the nature footage he had acquired through his many drone expeditions.

Johnson agreed with Foster’s concept and adds, “Since my grandmother had Celtic roots I intuitively created an imagined ancestral story that I believe lives deep in my soul.” Renowned Jazz journalist and historian Bruce Crowther writes, “Many musicians touch the heart or the mind or the soul, some reach out to more than one of these, only a few appeal to all. With her new album, Ellen Johnson is clearly one of these select few.” Johnson is a seasoned professional jazz recording artist, educator, songwriter, author, and publicist. She has performed with many jazz icons that include Charles McPherson, Louie Bellson, and Sheila Jordan whose biography she recently completed entitled Jazz Child: Portrait of Sheila Jordan published by Rowman and Littlefield.

Foster has been a leader in the prosumer drone market, writing articles, product reviews and speaking at the industry’s top conference circuit, most recently NAB and InterDrone, as well as providing workshops and award-winning video training for CreativeLive  (http://bit.ly/DroneWorkshop). Due to his research and product reviews Foster is supported by the prominent leaders in drone technology including DJI, Mulitcoper Warehouse, GoPro and DSLRPros.

Form & Formless is available on iTunes, Amazon and CDBaby.com and more information at EllenJohnson.net. Contact Jeff Fosterat SoundVisionsMedia.com or PixelPainter.com