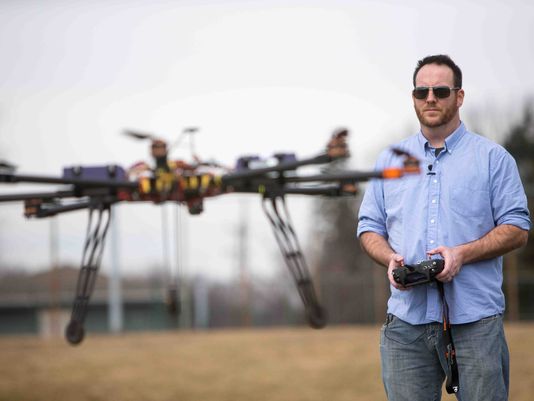 “A real estate broker, a chemical plant manager and a computer science wiz enter a Wilmington basketball court on a recent weekday, carrying aluminum briefcases straight out of “Mission Impossible.”

The trio of grown boys with toys retrieves an octocopter, a mechanical spider drone that could conceivably carry two nine-pound babies, rendering the stork obsolete.

Daniel Herbert, of Newark, turns on a brick-like transmitter to calibrate the device’s GPS. Eight propellers spin before liftoff in a chorus of rabid hornets. Herbert points the joystick upward and the drone shoots for the sky.

“Are you guys from the NSA?” a teenaged basketball player asks.

Herbert is not, but he’s on the National Security Agency’s radar.

The founder and owner of Skygear Solutions off Kirkwood Highway custom builds and repairs drones for a living. On the cutting edge of a haphazardly regulated technology, he can’t find a single competitor in the state.

Beyond that, the serial tech entrepreneur is on a mission to give drones (he prefers Unmanned Aircraft Systems) some positive PR to counteract media reports about drones hunting down terrorists, crashing on the White House lawn or spying on cute neighbors.