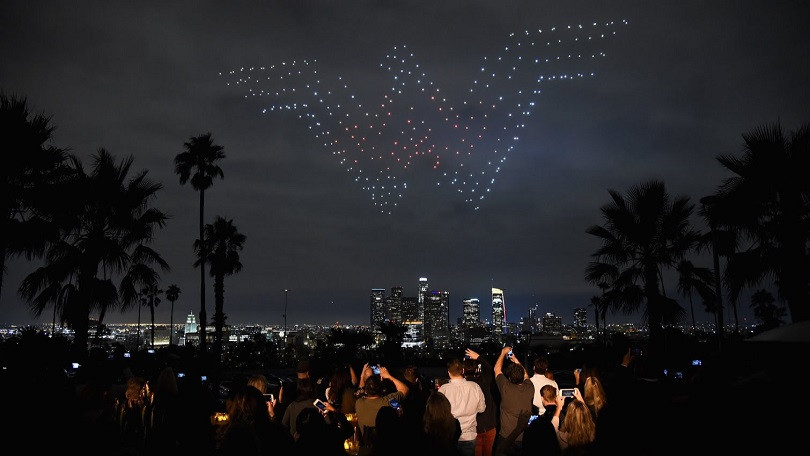 If you were in Los Angeles on September 14, and looked up into the night sky, you would have seen a swarm of 300 Intel Shooting Star drones, equipped with LED lights, flying in sequence to form a huge W.

Despite initial paranoia in downtown that the display was a subliminal message from a more advanced civilization, the drones were in fact working for Warner Bros/DC Comics, promoting the home entertainment release of Wonder Woman.

Cool studio marketing stunts aside, you might have been curious to learn how drones fly in formation. That’s what PCMag wanted to know, so we went to the first Multi-Robot Systems (MRS) conference at University of Southern California (USC) to grasp the science behind Borg-like UAVs.

MRS is a new initiative of the IEEE RAS Technical Committee on Multi-Robot Systems, and it’s intended to bring together researchers who are in the field of multi-robot systems (MRS) and multi-agent systems (MAS). “Typically MRS/MAS research is spread across large conferences, so the intent of this more focused conference is to bring those researchers together to highlight the best in the field and learn more from each other,” said Dr. Nora Ayanian, Assistant Professor and Director of the ACT Lab at USC and MRS chair.

It was definitely an advanced academic symposium, with peer-reviewed papers presented in quick fire rounds. But the scientific principles were fascinating.

Most computer science programming is based on “if/then”—essentially procedural decision making. But in order to have true automation and AI, drones need to get modular, become self-aware, and make decisions based on experience, (i.e. like humans) in their style of problem solving.

Dr. Ayanian joined the Viterbi School of Engineering at USC’s Department of Computer Science in 2013, after doing post-doc work at MIT’s Distributed Robotics Lab (CSAIL). Her work focuses on end-to-end solutions for multirobot coordination, which start from truly high-level specifications and deliver code for individual robots in the system.

Source: Drone Light Shows Look Cool, But How Do They Work?