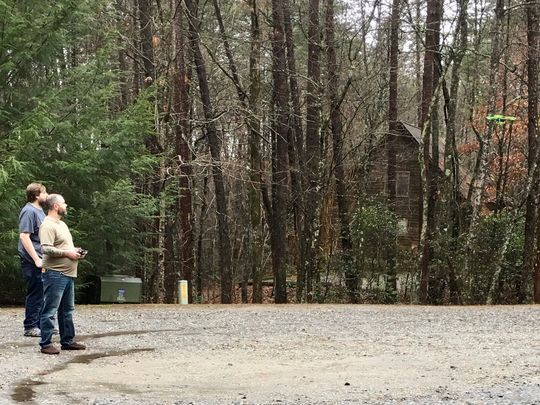 It was but two days after Christmas when the Fenno family lost their new Christmas gift: a drone.

The Melbourne residents were visiting family in Georgia when they took the drone for its first spin. It was dark, said Kaitlee Fenno, but the drone had lights so the family assumed it was in the clear.

“We were out in a long drive with an open field near the bottom, so we thought for sure we wouldn’t lose the thing even with the surrounding woods, and especially with the bright lights,” said Fenno.

But it only took 10 minutes for Christmas drone 2017 to go missing in action.

“Apparently my husband took the drone too high, or something happened where it lost connection with the controller — perhaps the battery died, but I suppose we will never really know,” she said, noting they tried to chase it down to no avail.

The Fennos story is like many along the Space Coast who with bright eyes took shiny new drones out for a test run only to come home empty handed.

The popularity of drones has more than doubled year over year, according to NPD, a group that analyzes consumer and retail data. Drone revenues were expected to soar past the $1 billion mark in 2017, according to the Consumer Technology Association, with about 3.4 million sold just in the United States. During the holidays, retailers capitalized on the trend as lower-priced drones in the $50 to $100 range lined shelves from technology distributors to grocery stores. The Fennos’ drone was purchased at an Aldi.

But for many, the fun was short-lived. Dozens chimed in after FLORIDA TODAY asked for missing drone stories on a popular Facebook parenting group.

“I tried to control it with the remote, but nothing I was doing seemed to control the thing. It just kept going up and away from me. I ran after it over to the next sidewalk still trying to control it or bring it down but lost sight of it and never saw it again,” said Stephanie Moinot of Melbourne.