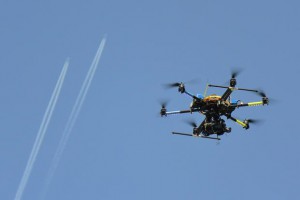 Drones in India are still illegal, at least for now

The Director General of Civil Aviation, or DGCA, in India has been slow to approve the use of drones.  However, drones in India should be legal soon.  Read more of this story on Live Mint.

The drone, from a seller in Jalandhar, is priced at Rs3,999 and there’s an assurance of free delivery anywhere within India. You can pay by card or cash on delivery. But the ad clearly says: “No Returns Accepted”.

If you are unable to shake the feeling of the ad being too good to be true, there are other options like the “Parrot AR.Drone 2.0 Elite Edition Quadricopter SAND” that is priced at Rs34,490 on amazon.in. You can remotely control the Parrot drone using an Apple or Android smartphone or tablet, and the drone can stream high-definition live video onto your smartphone or tablet. You also have the option of buying the drone in equated monthly instalments, or EMIs.

It’s best to scout sites like Flipkart.com and Snapdeal.com as well for drone options, or ask friends who may have bought one for recommendations.

There’s, however, one big hurdle here. You cannot legally fly a drone in India. At least not till the Director General of Civil Aviation, or DGCA, permits it.

On October 7, the DGCA acknowledged in a public notice that a UAV or unmanned aircraft systems (UAS) “has potential for large number of civil applications” but added it has “safety” issues and poses a “security threat”, and can cause air collisions and accidents. It added that “DGCA is in the process of formulating the regulations (and globally harmonize those) for certification and operation for use of UAS in the Indian civil airspace. Till such regulations are issued, no non-government agency, organization, or an individual will launch a UAS in Indian civil airspace for any purpose whatsoever”.
In short, you will need government permission to fly a drone unless, of course, you’re the police and you use it for surveillance or to disperse mobs with pepper spray as the Lucknow police is planning to use the drones, according to a 3 April Press Trust of India report.

Many of you would have sighted a group of youngsters remotely flying their drones over beaches and from rooftops to entertain themselves. But there have been cases of more serious users like Francesco’s Pizzeria delivering a pizza using a four-rotor drone to a customer whose flat was located 1.5km away from its office in Central Mumbai on 11 May. Unfortunately, when a video of the experiment went viral, the Mumbai police filed a complaint on the “illegal” delivery, according to a 24 May report in The Hindu.”

While drones are still illegal in India, read about UAV Legislation throughout the world.

Interested in reading more articles about drones in India?

Preparing for take off – The DGCA is framing guidelines for uavs in India
The Directorate General of Civil Aviation (DGCA) is working on an interim operations guidelines for the civil use of drones or unmanned aircraft systems (UAS), the ministry of civil aviation said in a written reply in the Lok Sabha. However, the ban on …
What drone policy questions need to be asked about classification, airspace …
The directorate general of civil aviation (DGCA) is currently framing guidelines for the operation of unmanned aerial vehicles (UAVs) or drones in India. While ecommerce players like Amazon have been pushing hard for the use of drones as a means of …
Something in the air: Drones finally making a comeback to Indian skies
“Look, it’s simple,” says Livingstone, “We have the knowledge and the expertise to help them put together a framework for flying UAVs in India. I don’t believe the DGCA even has a single, qualified UAV officer on board.” Earlier this month, the …
UAVs in India | Center for the Study of the Drone
Need to Know provides context and resources to help you get a better understanding of recent developments in the world of drones. What You Need to Know About Drones in India. Last May, Mumbai became the first city to …