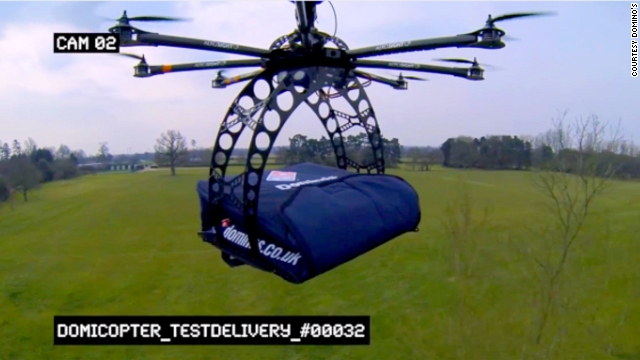 Drones, and drone applications, are a hot topic in pretty much every industry right now.

Big business is searching for optimal ways to use drones and reduce costs, artists and creatives come up with interesting and unusual applications for drones every week. Every week we see new projects and experiments using drones to inspire people. It’s clear enough that drone are the future and in this feature we will showcase how they will revolutionise the world. Without further ado, we represent the top 5 uses for drones:

Drone applications, from drones shooting each other, to drones tracking koalas, this week we have all sorts of cool new stuff for you, so check it out and vote for your favorite!

We’ve already seen drone racing and drone arena fights.. Now it’s time we met the new contender for innovative hobby – drone dog-fights. Drone enthusiast and designer Andy Shen collaborated to with rival Ryan Gury to create the first-ever Nerf-disc shooting drone. The advantages of Nerf discs are that they are relatively safe and yet able to fly far and in a straight direction, similarly to a bullet. Right now the project is far from complete, but in the future we can imagine FPV drones armed with Nerf discs flying through elaborate obstacle courses and shooting each other as a widespread hobby or sport. As the creators said, fighter drones open up a whole new type of possibilities for entertainment. Fighting for entertainment was never really possible with race cars or race airplanes, or any other vehicle for that matter, but remote-controlled fighter drones are a promising opportunity for the entertainment industry.

In this video we see drones being used to build an architectural structure according to 3D spatial instructions completely autonomously. ETH Zurich along with Gramazio Kohler Architects and roboticist Raffaello D’Andrea managed to assemble a six meter tall composed of bricks solely using drones. The bricks used were made of polystyrene in order to be light enough for the drones to carry, however the fact that they managed to build a “differentiated structure made out of 1,500 elements” is nevertheless awe-inspiring. So far people only see drones in construction for inspection purposed, but it’s evident that the applications are much greater. Drones can fly to great altitudes and approach things at angles from which humans never could, allowing us to build much more elaborate structures. Moreover, drones don’t need 3D instructions translated into 2D form, they can simply follow them and do it with much greater precision than a human ever could. Let’s not even get started on the safety advantages of using drone in construction work.

Description: Peter is the head content creator for the drone startup Flyver. The company’s goal is to create a unified SDK and marketplace that will allow developers to create and publish apps that will work on any drone. Right now the Flyver SDK is in beta stage, but you can subscribe to their mailing list and monitor their progress here.


View all posts by Peter Mihaylov →

One of the best drone applications?  The brain… A Lisbon-based company called Tekever has created a prototype for a brain-controlled drone. The technology works by adapting electroencephalography (EEG) to give commands to a drone in certain situations. In the video we see that the drone is controlled by concentrating on moving a point on a screen in certain directions and they mention that one does require specific training, however they are working to make it so that the drone will do what you really intend it to do. The company believes that this will one day allow commercial flights to be pilot-less. That seems a bit far-fetched, however the more immediate goal of allowing disabled people to fly drones and experience the world through them is a real possibility.

And the cutest drone application of the year award goes to… The Koala Tracking Drone used by Queensland researchers. The rig is very simple, drones equipped with infrared heat-tracking cameras fly over the treetops and spot the koalas in the trees based on their distinct heat-signature. Computer software distinguishes koalas from other animals that might be in the trees. This new drone application allows a significant reduction of manpower and also enables monitoring of koala populations in hard-to-access areas. The reason koala monitoring is so important is because their populations have been steadily declining lately and researchers need to have information in order to best manage the species’ survival. And why is that important? Well, because koalas are furry little balls of cuteness, obviously.

Meet the Splash Drone. In short, it’s a waterproof quadcopter which can take off from water and lets you take pictures of your sick surfing sessions.  The drone features a payload dropping function, allowing it to make small deliveries, as well as a flare in case you ever get stuck at sea. Unless you are a pro-surfer you probably don’t have a dedicated camera operator, which is why the Splash features a “follow me” function as well as the ability to map out a specific flight path. We already have tracking drones for snowboarders and surfers, now let’s just wait and see the sick extreme sports movies!

Do you know of other great drone applications?