FPV Racing is hot!  Our friends at Skylab Flight Systems review The Red Devil 250 Racer for you

I was asked by a friend over at Scratchbuilds.com if I’d be interested in reviewing their newest RTF FPC racer, called the Red Devil.  My response was immediate, YES!  After making all of the arrangements, I started to question my decision.  I’m not FPV racer pilot!  I’m going to need some assistance on this one!  What do most people do when they need help?  They call up a friend that they know they can count on, of course.  I am no different.  So I reached out to my friend Cordell, AKA DakoRob.

I already announced that DakoRob would be the new Scratchbuilds.com pilot.  That announcement came with a teaser trailer of DakoRob’s first encounter with the Red Devil.  If you did not catch that, then I’d suggest going back and having a look before we move forward.

What is a the Red Devil 250 FPV Racer?  Well, let’s list the specs quickly:

All of the hardware used to assemble the Red Devil is anodized red aluminum (where the red comes from).  The combination of the carbon fiber frame and the red hardware give the Red Devil quite a unique look.  The Devil comes from the speed generated by the motors/ESC combination.  More on that later though.

One of the things that separates Scratchbuilds.com from some of the other companies assembling these 250 racers is that they were one of the first to ship the aircraft in a case.  While the case is not of same quality and grade as what you might keep your DJI Inspire 1 or 3D Robotics Solo, it is more than adequate to protect your racer and enable to you carry it around with you safely.  You never know when you might have to break it out for a race, right?!  Here are some photos of the Red Devil for your viewing pleasure. 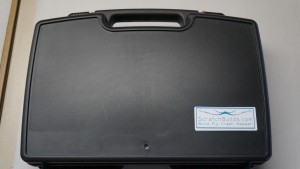 The first thing that I noticed about the Red Devil was how well it was packed into the case provided by Scratchbuilds.com.  There were small holes in the foam so there was no mistaking where the little drone itself is to be placed.  Inside of those holes in the foam were red cylinders placed to keep the foam from expanding and hiding the holes.  It’s the little things that make a difference in my opinion.  While that little thing may not seem important, it does show that the company is putting thought into every aspect of what they present to the customer.  That is a level of customer service that has been lacking of late in the entire industry.  So it was nice to see a small company taking the time to think about the customer in all things related to the little drone that they just purchased.

After unpacking the Red Devil from the case, I had to chuckle to myself because Scratchbuilds.com included a LOT of propellers for the review.  They surely know that I’m not a racer and would need a lot of props because of crashes.  But that brings me to another point about FPV racers, and the FPV racing in general.  These things are built to be tough but also to be easy to rebuild.  You are expected to crash when learning to race via FPV.  Scratchbuilds.com does take that into consideration when they ship out the Red Devil to any customer.  They include two full sets of propellers, just in case.

Looking at the little drone itself, there are a lot of small details in the build that shows that Scratchbuilds.com understands the genre.  The antennae from the radio receiver are spread 90 degrees apart, as recommended by the radio manufacturer, to allow for the best possible reception.  All wires are hidden away as neatly as possible and out of the way.  They are placed so that, if you do crash, you will not cut a wire doing so and thus cause yourself all kinds of problems.  While inspecting the Red Devil, I placed the included battery on the charger as it was properly shipped with only a storage charge and separated from where it would be placed when flying.

While admiring the build quality of the Red Devil and waiting for the battery to charge, I remembered that I needed to add eight AA batteries to the included FlySky FS-i6 transmitter.  Picking up that transmitter for the first time, one will take immediate notice of just how light the unit itself is.  Wow, it is really light!  The body is also thin, much thinner than say a Spektrum DX6.  I flipped the transmitter over and added the batteries to the compartment.  Not too terribly long after doing that, I heard my lipo charger beeping, indicating that the flight battery was fully charged and ready.  Only thing left to do now is take the Red Devil out and see how it flies!  Before we do though, have a look at these photos showing the Red Devil up close and personal! 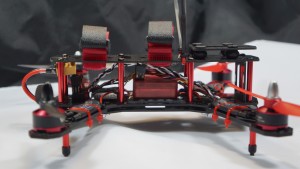 After making sure I had all that I needed, I took the Red Devil outside in front of my shop.  The Red Devil has battery straps attached already but you don’t just strap the battery on to an FPV racer.  Balance of the entire drone is important to getting it to fly as expected and intended.  So, I found the proper balance point and THEN strapped the battery into place.  I turned on the FS-i6 and then plugged in the flight battery.  I listened for all of the beeps (those of you not familiar with the CC3D flight controller will need to watch the video that is emailed to you from Scratchbuilds.com.  It explains a lot that I have skipped because I’m assuming that you’ve investigated flight controllers at this point and well aware of how a CC3D flight controller starts ups) from the flight controller and the radio.  Once the flight controller finished starting up, I unlocked the motors and eased the throttle stick up.  The props came to life as I increased the throttle.  I tested the response to my stick inputs before allowing the drone to become airborne.  Once I was confident that all controls were responding correctly, I gave the Red Devil about 45% throttle and it started to rise into the air as I increased the throttle to get it about 1 meter above the ground.  It was hover rather nicely and only needed a few clicks to trim it out to a steady hover.  I then took it for a VERY slow lap around the front yard and was really impressed with how well it responded.  But that was the extent of my first flight with the Red Devil.  Not bad in my opinion.  I didn’t even need to replace a prop yet.  Haha.

From here, I’m just going to say that I turned the little rocket over to someone who was truly qualified to fly it.  DakoRob came for a visit, which I captured on video for you all.  Let’s just say this, DakoRob was more than impressed!  See for yourself below:

Brought to you by: Skylab Productions via Huzzaz

After seeing DakoRob talk about and fly the Red Devil, what do you think?  According to DakoRob, “The Red Devil is ready to go OUT of the box.  Just pop in your batteries and go!”  I have to agree with that.  I found that starting the Red Devil up and flying a successful lap around the yard was truly that easy.  Why is that a big deal?  Well, for starters, it makes the Red Devil ideal for someone new to the 250 class quadcopter. Scratchbuilds.com have found settings that work for both the person new to FPV racers AND to seasoned veterans, like DakoRob.  If one decides that the settings need to be tweaked to suit their flying style, it’s only a matter of installing the OpenPilot.org ground control software and then making the connection to the flight controller.  If the tweaking does not work out for the person, Scratchbuilds.com provides them with a video showing them how to get back to the settings the Red Devil contained when it originally shipped.  The CC3D flight controller, being open source, invites tweaking though.  On top of the support provided by Scratchbuilds.com, there is a very large community who have been using the CC3D for some time and are happy to help anyone that asks for it.

The bottom line is this, if you want a ready to fly 250 class FPV racer, the Red Devil is for you whether you are new to the scene or a veteran.  The setup allows for the quick addition of a camera and video transmitter to make it a full FPV racer.  In fact, you can order it from Scratchbuilds.com that way!  They will even sell you a full setup complete with a set of FlySight FPV goggles!  Please visit the Scratchbuilds.com website for pricing information!

Thank you all for your time!  Remember, ALWAYS FLY SAFE!  Stay tuned for more videos from SkylabHQ!