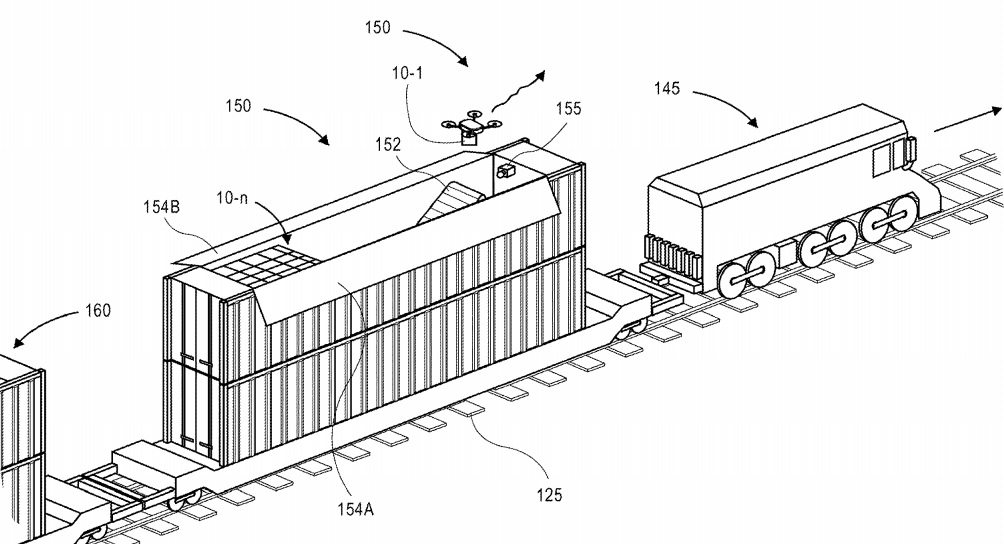 If Amazon follows through on a pair of patent applications, future fulfillment centers could be transported on their rounds by trains, ships or trucks and deliver their goods with autonomous drones flying out from the tops of shipping containers.

The on-demand system for package delivery is covered in two applications that were filed a year and a half ago but published just today. The inventors are principal software engineer Brian Beckman and intermodal program manager Nicholas Bjone.

Their concept calls for putting all the hardware for a fulfillment center, including a robotic arm and a squadron of drones, inside shipping containers (also known as intermodal vehicles). The standard-size containers are designed to be easily transferred from ships to trains to tractor-trailer trucks.

Goods destined for delivery could be loaded into shelves inside the containers, moved around using the robotic arm, and loaded onto drones when customer orders are passed along via wireless connections. Lids on the tops of the containers would open to dispatch package-laden drones.

A cutaway view shows how a shipping container could be equipped with drones, cameras, a conveyor belt, a robotic arm and shelves of goods. (Amazon Illustration via USPTO)
The system’s advantage has to do with the ability to send out fulfillment centers that are laden with goods via a wide range of shipping routes in response to anticipated demand.

“The areas where the demand is known or anticipated may be identified on any basis, including but not limited to past histories of purchases or deliveries to such areas, or events that are scheduled to occur in such areas,” the inventors write.

For example, when it’s time to release the next “Game of Thrones” book or the next hot gadget (Amazon Echo Auto, anyone?), the containerized fulfillment centers can be widely deployed to…