While the laws regulating drone/uav usage are rapidly evolving we wanted to share this guide to drone laws and regulations from December of 2014 that our collaboration partners at Flyver.co originally wrote.  We will try to provide regular updates as this is a component of the current drone environment.

Please let us know if you would like to write a regular drone legal piece for The Best Drone Info to ensure we keep our readers up to date with the latest in this rapidly evolving area.  Drone laws by country are evolving quickly, keep checking back to stay on top of them.

Drone are the future. We know it. And if you’re reading this article you probably know it as well. There is just one problem. The future isn’t quite here yet, because it’s being held back by a bunch of pesky regulations. The good news is that if you know the rules and follow them, you can do whatever you want with your drone. And since we strive to enable people to create apps for drones using the Flyver SDK, we feel that explaining the regulations in different countries can be very helpful to all developers and enthusiasts out there. That is why we set up this little guide to give you a starting point. It is by no means professional legal advice, but rather something you can use to understand the basics of drone regulations. Since every country has a different set of laws regarding UAVs, we have split the guide into several sections.

The biggest drone market in the world and also one of the worst regulated ones. The US has been making the headlines for months now because of the fact that it’s taking so long to create proper UAV regulations. As of right now there is just ‘guidance’ for non-commercial use and no actual laws, but don’t expect it to stay that way for long. The first thing that’s important to know is that the Federal Aviation Administration (FAA) has the same laws for all unmanned aerial systems (UAS) which pretty much means that it does not differentiate between your personal quadcopter that you fly in your backyard and huge hexacopters that can be used for so many more serious things.

Business use of UAS is outright banned right now. We know of a few examples of companies being granted exemptions from this ban, but only after lots of lobbying in Washington. A ban on commercial use of drones means that it can’t in any way be used in something that is connected with commercial activities. It doesn’t matter if the drone isn’t directly bringing in money. If it’s adding value to the business, it is illegal. So for example a drone-filmed commercial does not directly make any money, in fact it costs money, but that isn’t the point. Since the commercial adds value to your business and indirectly leads to new clients and funds coming in, it is illegal. And it’s probably going to stay that way for a while since the FAA recently said that business use of drones will remain banned for the immediate future.

Personal use, however is quite liberally regulated right now. The main thing is to keep your drone within your line of sight at all times. Everything else is, as we said before, just advice.

“Users are advised to avoid noise sensitive areas such as parks, schools, hospitals, and churches. Hobbyists are advised not to fly in the vicinity of spectators until they are confident that the model aircraft has been flight tested and proven airworthy.

Model aircraft should be flown below 400 feet above the surface to avoid other aircraft in flight. The FAA expects that hobbyists will operate these recreational model aircraft within visual line-of-sight.”

You might have noticed that the advice is intended for model aircraft. It’s not that the FAA wants to mock all drone pilots by calling their machinery model aircraft, it’s just that they do not differentiate between the two. The 400 feet limit is probably the only real restriction you have to be careful about when flying your personal drone, so whatever you do below that altitude should be fine.

We expect to see more regulations for both commercial and personal use to come in the next years, even though news keep coming out that the FAA is falling massively behind on it’s planned legislation and the deadline for implementation is getting closer and closer.

The UK has a more serious set of laws since it started making regulations about UAVs much earlier. The authority which is handling the use of drones in Great Britain is the Civil Aviation Authority (CAA). Its rules are quite clear, concise and easy to follow:

It’s also important to note that if you collect identifiable footage of individuals, you will have to comply with the Data Protection Act (DPA) when using them. Non-commercial use is usually permitted, but the footage cannot later be reused for profit. If you actually want to use the images commercially, you will need an exemption from the CAA.

The regulations in Canada are quite similar to those in the UK. As long as you stay within a reasonable distance from people and buildings and restricted areas, you should be fine. However you have to make sure that your personal drone is within the limitations for size and weight, otherwise you have to apply for a special license in order to fly it. A drone lighter than 2 kilograms is allowed to fly without asking for permission. A drone anywhere between 2.1 and 25 kilograms also does not need permission to fly, however an email must be sent to Transport Canada with your name, adress and phone number, the UAV’s model and serial number, a description of the operation and it’s geographical boundaries.  And during the flight there are the following regulations:

Transport Canada even made this neat infographic to illustrate its regulations: 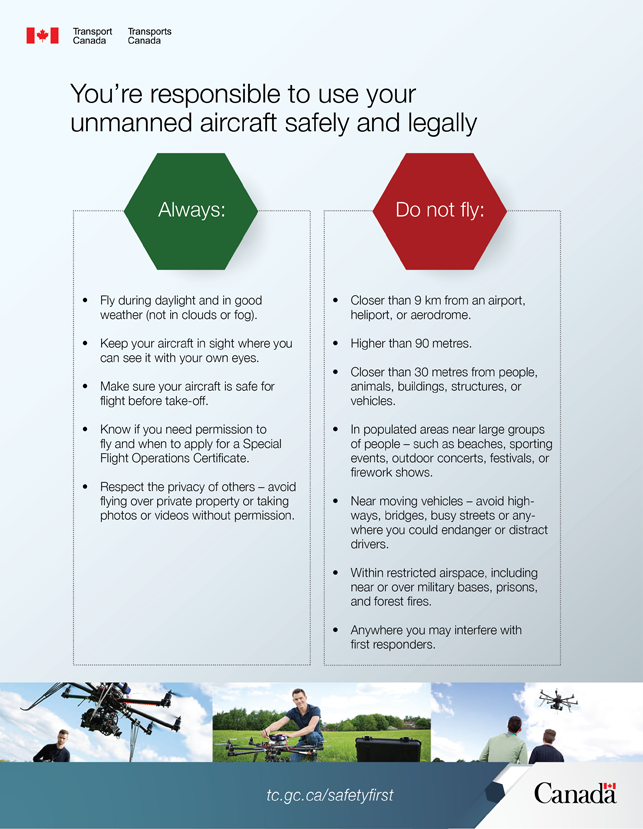 Since we deal a lot with drones we can give you some quick do’s and don’t’s. With all the talk of military drones, UAVs have a pretty bad image right now and it’s our job to make sure that changes. It’s the duty of every pilot out there, who wants to have a chance to use his drone for more serious activities, to promote a better image for drones. You can do this by:

The general point is not to make people uncomfortable in the presence of drones.

We understand that regulations limit the creativity of the enthusiast, however they are there for public safety. If we ever want drones to realise their full potential and become a tool for humanity, we have to respect laws and show that drones can be a force for good.

We hope that this information has been helpful. If you have any questions do not hesitate to contact us or leave a comment below!