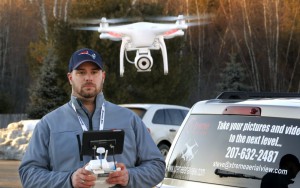 Lawmakers across the globe are struggling.  Drone technology, often maligned and misunderstood, is something that they want to put legal limits upon but how much, or how little, makes sense?

In our opinion the FAA, in the example below, has overstepped their bounds.  Drones/uavs are a valuable technology that can greatly benefit society.  Like any technology, there are positive and negative uses, but the vast majority of uses are positive (or at least neutral). Steve Girard’s efforts to create a part-time source of income, using his DJI Phantom for aerial photography, must be allowed.

Steve Girard takes aerial photos and videos using his drone. The Gorham man received a voice mail from a local FAA administrator ordering him to “pull down” his website about his service, and threatening “fines and penalties for this activity.” Gregory Rec/Staff Photographer

“Steve Girard of Gorham has a full-time job, but he hoped to make a little extra cash by turning a hobby – flying his drone quadcopter – into a side gig taking aerial pictures.

He practiced flying the modified, 3-pound DJI Phantom two for months after he got it last year, using the remote controls by hand at first and then programming GPS flight patterns so he could focus more attention on pictures and videos than on flying and hovering.

But when he finally got good enough to advertise his aerial photography services on his website, the Federal Aviation Administration quickly stepped in last week in an attempt to shut him down, a move that legal experts say oversteps the agency’s authority.

“We’re looking at your website, and an investigator will be in touch with you regarding the limitations which you may be exceeding in regard to advertising drones and aerial footage,” Reed said. “They’ll be looking for you to pull down the website. … There are serious implications, and there are fines and penalties associated with this activity.””