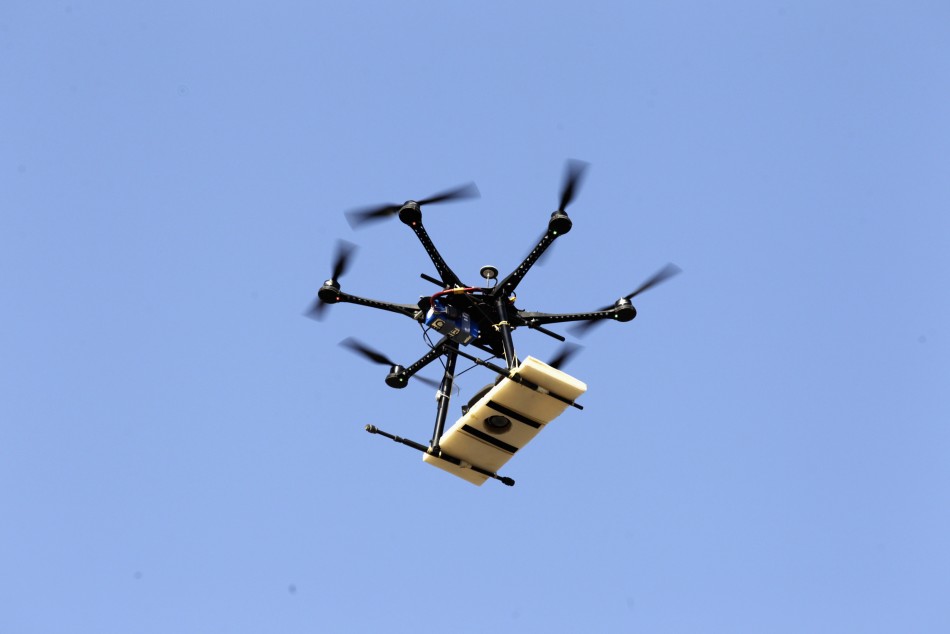 Let’s Fly Wisely is a partnership working to run a trial of medical drones, delivering medical supplies to a free health clinic in Wise, Virginia.

We read a story on the Fox News website titled “First FAA-approved drone deliveries coming July 17?. We decided to reach out to contacts at NASA, who is involved in the effort, as we had not seen the FAA issue approval for this type of medical drone testing.  We are glad we did.

Frank Jones, lead for the NASA Langley portion of the flight test, took time out of a very busy schedule to answer a few of our questions.

Researchers at NASA’s Langley Research Center in Hampton, Virginia, are happy to work with any of the six FAA UAS test sites to help develop unmanned aerial system technologies and conduct research into how to safely integrate drones into the national airspace system.

We were approached by the Mid-Atlantic Aviation Partnership, led by Virginia Tech, to participate in “Let’s Fly Wisely” – what is expected to be the first official delivery of medical supplies by drone to the annual Remote Area Medical Clinic in Wise, Virginia. The plan is still under review by the FAA, as I understand. The Federal Aviation Administration Certificate of Authorization or COA has not been approved yet. A COA is a requirement for UAS to operate in the national airspace system (NAS).

The plan still under review would have the NASA Langley aircraft pick up about 10 pounds of pharmaceuticals and other medical supplies at a small airport in Tazewell County in the Appalachian mountains in southwest Virginia, then fly them to another small airport (Lonesome Pine) in Wise County, not far from the location of the free clinic at the Wise County Fairgrounds. According to the proposal, the supplies would be separated into smaller packages and delivered from the airport to the fairgrounds by drones operated by Flirtey, Inc. The plan is for Flirtey to lower them to the ground by tether. Both the NASA fixed wing SR22 aircraft and multi-rotor delivery drones will be remotely piloted.

The use of the drones would provide delivery and protect the privacy of the many patients who are using the services of the medical clinic. We plan to demonstrate the capability to control our SR22 aircraft from a portable ground station for the first time. We have controlled it from our permanent ground station at NASA Langley, as well as from an onboard research operator and from an onboard research computer in previous tests. In addition, we are planning to look at the safety case for use of UAS to deliver supplies to remote areas including the transfer from our aircraft to the small drones.

Q. The article also notes NASA will be using a fixed wing aircraft, why fixed-wing vs. quadcopter design?

We have a number of UAS research facilities at NASA Langley. One of them is a fixed wing Cirrus SR-22, which we can use to test UAS technologies and mission concepts. The plane is a UAS surrogate that will be remotely piloted from the ground (although there always is a safety pilot on board as the pilot-in-command to allow operations anywhere in the national airspace system).

Let’s Fly Wisely is an opportunity to help accomplish a worthy mission, evaluate a new capability for our testbed, understand many of the considerations for operating UAS and manned aircraft safely in proximity, but segregated, from each other, and perform some public education on how NASA develops and evaluates new technologies- in this case UAVs. The event at Wise provides the opportunity to conduct a flight demonstration in the state in which we are located. We have already used the SR-22 to test UAS technologies in North Dakota – many states away from Virginia. (More here: http://www.nasa.gov/centers/langley/aeronautics/ldcap.html)

Q. Will NASA be making use of UTM, or performing some level of testing of UTM technologies, as part of this effort?  (UTM = NASA’s air traffic control system as I am sure you know).

NASA has many UAS technologies under development and testing. The SR22 currently uses VHF datalink capabilities to perform beyond visual line of sight command and control from a remote ground station. In the near future we will implement an over the horizon capability using satellite data link and voice communication.

We’re also using existing commercial off the shelf ADS-B technology to provide situation awareness to the safety pilot on board the aircraft and in some circumstances the ground station used for command and control of the aircraft. In prior research, using ADS-B for sense and avoid purposes, the SR22 autonomously maneuvered to avoid selected traffic based on the onboard algorithms under development by several partners.

The SR22 aircraft has also been used to evaluate terrain avoidance algorithms that could support UAS and personal air vehicles.

Q. Is there anything else NASA would like the public to know about this effort?

This is just one of many research efforts NASA Langley is working on to advance the safe integration of UAS in the national airspace system (NAS).

For example, we have researchers who have created, developed and tested algorithms, which automatically evaluate and define the conditions under which a large class 3 unmanned aircraft is “well clear.”

NASA’s UAS Integration in the NAS Project is working to provide research findings to reduce technical barriers associated with integrating UAS into the NAS using integrated system level tests. Barriers include a lack of sense-and-avoid concepts and technologies that can operate within the national air space system, robust communication technologies, robust human systems integration, and standardized safety and certification guidelines.