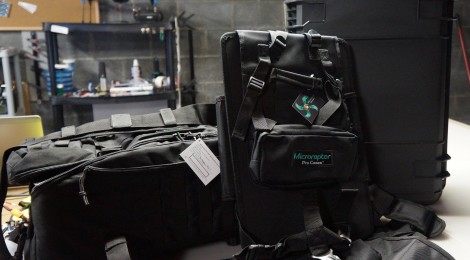 Our friends at Skylab Flight Systems once again review a product from Microraptor.  In their first review they took at look at the Microraptor Pro backpack, this time they are digging into their waterproof cases.

Testing the Duffel/Backpack was easy compared to this case.  The reason for that, this case is designed to be the rugged alternative to the Duffel/Backpack case.  Fuertes Cases manufactures these customized case solutions for UAV, RC and tech under the their brand name Microraptor Pro Waterproof Case to provide off-the-shelf convenience with superior custom protection they have been known for in the Govt, Industrial and OEM commercial sectors since 2001.

First, let’s talk about the case itself for a minute. The hard case is a ruggedized injection molded Storage/Transport case , and it meets or exceeds specifications related to most military and industrial applications.  That translates to a tough as nails case that will handle all of the abuse thrown at it!  The case is rated IP-67, which means it has been tested to be waterproof in up to one meter for 30 minutes. There are 2 latches on the front of the case, which twist lock into place, plus two additional padlock holes on each side for security.  Additionally, keyed chromed metal locking latches can be ordered for $15.00, available installed at the time of purchase or a DIY kit as an afterthought.  In fact, I requested a set for myself and was pleasantly surprised at how easy they were to install.  When the right front latch is opened, if any pressure has built up, you can hear the pressure being released before you open the case.  The automatic purge valve is located under this right front latch, observed by a tiny o-ring. When the right front latch is opened, there is a hissing sound releasing any pressure that may have built up before the case is opened.  This “hiss test” would also be a confirmation that the case’s airtight and waterproof features are performing properly. In fact, they recommend tweezing the tiny o-ring out for check in baggage travel to avoid a vacuum effect.  Then, pop the o-ring back into place to ensure the case is once again airtight and waterproof.

The customized foam inside is very similar, if not identical, to the backpack version.  It is custom cut to fit the Robotics Iris+ drone and accessories perfectly. This case can store everything that 3D Robotics included in the box as well as an additional 5 lipo batteries (for a total of 6!), a tablet and there is even a place for a spare/extra GoPro.  The storage space for the Iris+ itself allows the storage of the drone WITH the gimbal (and camera) still attached, and of course, the radio transmitter.  All of the propellers must be removed in order to stow the Iris+ correctly but there is a convenient storage place for the propellers, which protects them from being broken in transit.

Now, let me describe a few features that appear to be quite unique to the Microraptor Pro line from Fuerte Cases.  The first signature feature I want to point out is the inclusion of a dessicant compartment AND the reusable dessicant they include free with case purchase (a MSRP $14.95 value).  What does that mean?  Very simply it is the ONLY protection against putting a wet or damp piece of gear into an airtight, dustproof & watertight case or opening the case in a high humidity environment and locking in the humidity.  If water can’t get into the case, that means it can’t get out either.  The dessicant absorbs that moisture, so nothing stored in the case will rust or mildew.  The best part is that they include the dehumidifier canister free with the purchase of this case.

I provide aerial photography services, so when I was called out for a job in a large mall, it gave me the opportunity to test the case in the field.  I had to park a great deal away from where I was working.  I was so glad that I switched cases now!  I was able to extend the handle and tow my drone behind me.  Not only that, but length and width of the retractable handle allowed me to strap two smaller cases to it.  This allowed me to shoulder my Sony Nex case and wheel the case behind me.  Once the handle is extended and the case’s weight is fully on it’s wheels, and it is effortless to pull.  While I had planned a test to verify the waterproof feature for later, mother nature provided me with a real world scenario.  Almost halfway to where the crew was supposed to meet up, it started to rain. Well, that was disappointing for several reasons.  One, was that it probably meant that I lugged all of my gear out for nothing.  This was no light shower though.  It was a torrential downpour that left most people running for cover.   More than a little concerned about my equipment, I spread out my gear to make sure that nothing was wet that shouldn’t be.  Since the Microraptor was carrying the most important piece of gear, I started with it.  Everything in the case was bone dry.  I didn’t find any area around the lip that showed a sign of potential weakness either.  The case passed the waterproof challenge.  Next up, toughness test.

I really had hoped that I would be able to travel via plane and have to take this case with me.  I wanted to see how it held up during the flight.  Unfortunately, that didn’t happen.  But I CAN share a secret that was shared with me about this particular case.  It WILL fit through the X-Ray machine at the airport.  That means that it can be taken all of the way to the gate where a polite request to stow it in the same area as the baby strollers etc. means easily reclaiming the case after landing.  A little negotiating can go along way!

With the waterproof claim verified thanks to mother nature, I had to start thinking of a way to test the durability of the case and it’s ability to protect my gear.  I could not have predicted that I would test this accidentally as well.  Then again, I’ve never had the best of luck.  Here is what happened to test the durability of the case.  I had the case loaded with my gear from the previous shoot and sitting on my main work table.  I was in the process of creating a video studio in part of the shop.  While working on that part of the shop, I inadvertently knocked the case off of the shop table.  I almost cried as I heard the case come crashing to the ground.  Yes, it was in a case, but nobody wants their gear to be suddenly dropped 3? to the ground, EVER.  I stopped what I was doing and rushed over to the case and flipped it back on to the proper side.  When I opened the case, not a single thing of consequence had moved!  The Iris+ was sitting the same place, undamaged and the radio hadn’t moved either.  The batteries were safely in place.  The only thing that moved were a few loose tools that I had not properly secured.  I should have put them in the tool bag that I keep rather than in one of the small compartments.  But the Iris+ and the radio I NEED to operate it were 100% undamaged.  The case did exactly what it was designed to do.  It protected the gear inside of it and received only a small scar for it’s efforts.

The Microraptor Pro line offers another item that I find useful..  This particular piece of gear was originally designed to turn the DJI Inspire 1 cases available by other manufacturers into a backpack.  After playing around with that concept, it was by accident that they discovered that this same piece of gear fit most of the other waterproof cases too!  While I did find that carrying the heavier waterproof case on my back would not be desirable for an extended period of time, I do appreciate the usefulness of shouldering the case when I am in some far flung location, with very little pavement and no extra hands to carry it.   I’ve include a couple of photos of the case being installed into this piece of gear, called the I90 Cargo Pack.

When I am looking for a case to protect my gear, I find it useful to list the conditions that I require to feel confident that my gear is adequately protected.  The Microraptor Pro Waterproof case passed my list test.  I was able to test the waterproof claim and the ability of the case to withstand a nasty 3? drop straight down to concrete.  This case proved that it can do all that it claims as well as travel well.  I would have no problem at all recommending this case to anyone in search of a case to store or travel with their gear.  The case retails for $220.00, but I found it on sale for $199.95.  That makes it more affordable than other options available today.  This particular case fits the 3D Robotics Iris+ and accessories perfectly.  It has been designed to provide more protection than any of my Iris+ drones will need based on the testing parameters.  What really impresses me about this case is how easy it is to transport and how small it is.  I mean, it sits on the back seat of my car without hanging over or requiring me to slide a seat forward to make room.  It is light and the wheels roll over all surfaces I tried them on.  They roll over grass/dirt surprisingly well and without requiring me to pick grass out of the wheel wells afterward.

The bottom line, the Microraptor Pro Cases Waterproof line of cases will provide any drone operator with the desired protection for their drone and for a price that belies the actual quality you receive!  If you are interested in learning more about this line of cases, click HERE for more information.