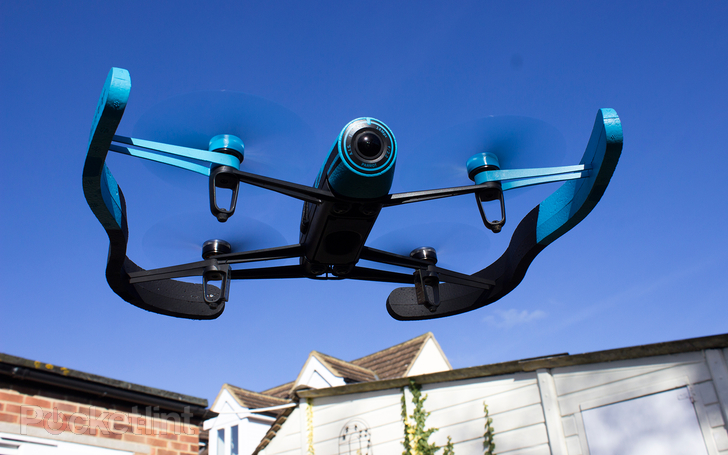 The folks at PocketLint wrote an excellent Parrot Bebop Review.  We have included a bit of it here but strongly encourage you to check out the entire review on their site.

“The Parrot Bebop, which follows-up the company’s AR Drone 2.0, is an affordable high-flier with built-in 1080p camera and app-based controls via tablet or smartphone. At £430 it couldn’t exactly be called cheap, but in the world of dronesit’s an affordable entry point that will come as a tempting prospect.

We’ve spent days playing with the Parrot Bebop in various environments and like the big kids that we are, have been getting excited about the prospect of spray-painting a giant yellow “H” onto our garden lawn.

Is the Bebop a successful mid-level product, or has it left us pining for more than its price point can offer?

The Bebop name sounds fun but it’s actually a pretty sleek looking high-flier. It comes in either black and blue, black and yellow or black and red. There are outer bumpers designed for indoor flying, but we found them helpful outside in confined garden space too – but gusts of wind can catch these and send the drone a bit out of control, so it’s best to remove them when doing any serious heights.

However, on first removing the Bebop from its packaging we thought it wasn’t the final product. It’s light to the point of feeling weak; part is made of a polystyrene material and there is a lot of movement in the joints. First impressions left us feeling worried we’d soon be sending it back in several pieces.

But we were wrong. The Bebop is lightweight, allowing it to hover with precision, but those moving joints and polystyrene upper make for perfect shock absorbers too. This, after a few crashes – and to be clear we crashed it from about 30 feet up after flying into a tree – left us feeling confident that the Bebop can take enough of a knock to enjoy flying it without worry.

Upon crashing the drone emits a noise and the power light flashes, which is a request for a restart. Tapping the power button twice and you’re good to go again.”

Parrot Bebop Drone Review: A Keen Eye In The Sky Without A Huge Price Tag
Parrot has a brand new drone on the market, featuring a 1080p video camera that captures motion at 30FPS, and that can take stills at 14MP. The camera has built-in stabilization, letting it avoid the kinds of shakes and jitters that can normally add up …
parrot at drone: Parrot Bebop Review
This is ultimately a toy, but a very cool one at that. If you can’t wait until more details on the new, likely more expensive, Parrot Bebop drone, and want a great drone for just fun, this will fit the bill. But its price is no accident.