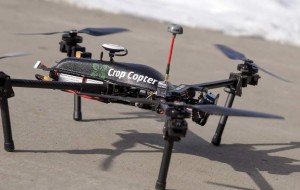 This article, originally published in The Gazette, shows awareness of precision agriculture growing in the mainstream.

DUBUQUE — Unmanned aerial vehicles, famous for delivering lethal strikes on terrorists, have yet to live up to their considerable promise for improving farm productivity.

An unmanned aerial vehicle at Crop Tech Services Inc. in Ely use drones such as this one to monitor clients’ farm fields. (Jim Slosiarek/The Gazette)

“They have the potential to gather and process an unprecedented amount of data, but that data must be actionable — it must provide information that guides farmers to specific actions that increase yields,” said John Deere robotics manager Stewart Moorehead, the keynote speaker at a recent conference in Dubuque titled Unmanned Systems and Agriculture.

Although the industry is in its infancy and hobbled by the lack of specific government regulations, it has a bright future, according to Moorehead and other speakers at the March 4 conference in Dubuque.

Drones — or unmanned aerial vehicles or systems, as their adherents prefer to call them — are ideally suited for scouting crop fields during the growing season, covering hundreds of acres in the time a human observer could walk but a few.

“You can also see patterns from the air that you can’t see from the ground,” said Brad Buchanan, owner of Cedar Rapids-based Crop Tech Services, which started using drones last year to supplement its traditional crop-scouting services.

“Right now, as the proposed rules stand, the use of drones is very limited beyond capturing images,” said Chris Draper, director of EMERGE, an entrepreneurial development initiative at Simpson College in Indianola.

The 55-pound weight limit, which precludes most chemical applications, and the requirement that operators keep the drones in sight are among the chief limitations, said Draper, a former employee of the Federal Aviation Administration, the agency that regulates drones.

Once the rules have been well established, drones will play an expanded role in agriculture, he said. But until the FAA issues formal rules governing commercial drone use — which many expect later this year — commercial operators are required to secure a Section 333 exemption.

Interested in reading more about Precision Agriculture?  It is a revolution that will continue to make farming more efficient, safer, and more economically viable.

The PrecisionAg Revolution
Today, however, the trend toward ever more uniform practices is starting to reverse, thanks to what is known as “precision agriculture.” Taking advantage of information technology, farmers can now collect precise data about their fields and use that …
Agronomy and Genetics in PrecisionAg
What are you doing to address yield variability? If you’re still trying to figure out the answer, you’re not alone. Derek Freitag, Canada Technology Development Lead with Monsanto talked about agronomy with a group at the 2015 Precision Ag…