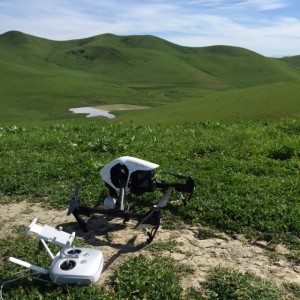 We have been using the DJI Inspire 1 for a month now and it has completely changed the way we approach aerial videography and cinematography. I used the Phantom 2 for almost a year. It allowed me (us) to be creative in a way that we were previously unable to imagine.

That being said, the P2 had its limitations. The HD-3D gimbal was steady, but our FPV setup left something to be desired. It was a pain (and a bit of a gamble) using the GoPro as well. Having to press record prior to taking off often resulted in a mixed bag of footage.

In my experience, the Inspire is much smoother for panning shots and is much more steady in the air (you can even pull of timelapse clips and long-exposure photos). For me, the biggest advantage of the Inspire is the ability to adjust video exposure and recording settings while the device is in the air. The iOS app is fairly intuitive and helpful (I’ve only experienced a bit of lag). With the TB48 battery I am able to get around 20 minutes of flight time (the standard TB47 battery gets around 15 minutes). That means I can switch between photo and video, adjust frame rates and exposure settings, shoot in multiple locations without bringing the “bird” down. It’s a game changer.

I have read on multiple forums about fly-away issues (I had a fly away with my P2) and software errors, but I haven’t had any major issues. I use the GPS and Attitude mode often, but have yet to use many of the auto functions (auto-takeoff, “return to home,” etc). I think the best way to avoid major issues is to read DJI forums regularly (ie learn from other’s mistakes), practice in open spaces, and be in control of the craft manually as often as possible.

I feel like my creativity has been taken to the next level with the Inspire and I’m excited to incorporate it into our 2015 projects. Here are some recent samples.

If you had an answer, take the time to also weigh in on what is the best drone to buy. Interested in learning more about the Inspire 1?

In-Flight Review with DJI Inspire 1
I just love drones. I like flying and shooting with them so much that I even started a film festival exclusively dedicated to their cinematic creations. I’ve flown many different types of drones and I have to say that the DJI Inspire 1 is outstanding …