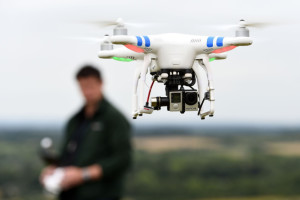 Drone technology offers many benefits – from the potential for speedy Amazon deliveries from the sky, to saving lives, as witnessed recently when the Lochaber mountain rescue team used one to find a hurt climber.

But on the flip side, there are risks associated with aerial technology, such as drone jacking or hacking.

Typically, when the conversation moves to the subject of drone-jacking, people immediately envisage a Hollywood-style breach of national security, probably in or around the White House before Will Smith leaps in to save the day.

However, attacks on this technology represent very real risks for the growing number of businesses using drones, such as engineers surveying buildings and infrastructure, e-commerce giants sending deliveries or companies gathering surveillance for insurance claims.

Earlier this year, Amazon announced an expansion to its research and development team in Cambridge. This will see 400 technology specialists fine-tuning the technology behind delivery drones. Despite claims that such deliveries are “pipe dreams”, there is a growing market for commercial drone technology, and with this comes a growing risk of drone-jacking.

Drones without adequate security in place will be vulnerable to hacks, as well as physical attacks. The report speculates 2017 will see an increase in availability, via the dark web, of pre-packaged software and toolkits for hacking drones. In these cases, hacking of the drone itself or its supporting software may result in either physical misuse or data breaches. Hacking for the physical diversion of a drone carries the potential for personal injury or property damage, actual theft of the drone or indeed, the item it was carrying.

Theft of data is another real risk, particularly if the drone contains personal or sensitive information, whether customer data included for delivery purposes or footage collected via an attached camera.

The loss of data via drone-jacking leaves businesses and authorities with many privacy concerns, especially with the EU’s General Data Protection Regulation (GDPR) coming into force in May 2018. In recent years, there have been a raft of data breaches resulting in an invasion of privacy for customers of companies, including TalkTalk and Camelot, and breaches of the GDPR could entail fines of up to four per cent of a company’s global turnover.

Source: Nick Gibbons: Secure your drone – or pay the price