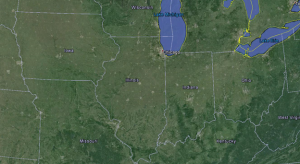 Musings on Big Data in Ag and UAVs (drones)

For the past couple of days the weather has not been great for flying here in St Louis and my mental gears have been grinding on away on the subject of “big data” in Ag UAV (drone) usage. For the past few months I have noticed that the two issues seem to come up together and while I cannot remember an instance where anyone has made a direct link between the two topics I have the distinct impression that there is this sense that UAVs will play a big part in gathering the raw information that will be used to create / solve the big data issue.

The Problem
So we are going to use unmanned systems to gather this information. Well how much big data is there to gather?  The numbers are staggering so let us take a look at an example from

the “corn belt” where the majority of the US’s  almost 170 million acres of corn and soybeans are produced.  Let us assume that we would need all of this agricultural production imaged and analyzed at least once during a growing season. Using small electric fixed wing drones we know that currently a single operator would be capable of imaging about 4-6 thousand acres per day (on a very good day) using the current operating guidelines of a 400 foot ceiling and the aircraft being within VLOS. So to cover the entire production of corn and soy would require ~30 thousand “flight days” representing a total of ~ 90 thousand individual flights assuming the average field size is 1000 acres (the trouble is the average individual field size is not 1000 acres -it is much smaller).

So we are looking at a scenario that thousands of small UAVs would be required to gather this data, thousands of operators all in vehicles running around the Midwest looking for a free wi-fi hotspot to upload their thousands and thousands of Gigabytes of data (if you think you are going to transfer it via the cellular network directly from the UAV in flight, get ready for sticker shock).

Big UAV vs Small UAV
So the next question is: if you want to capture this data with any kind of efficiency how do we do it?

The Bottom of the Barrel?
As I mentioned earlier, we have seen in the past 24 months a rapid devaluation of unmanned hardware technology and capability. This is pointed to by many as a “democratization” of the technology but for myself I am concerned that this process appears to favor non-US based entities exploiting artificially cheap R&D and production costs. Are now starting to see the end game playing out in scenarios where individuals and companies will not have to purchase hardware to gather data? Already a fledgling drone rental business is starting to make an appearance with firms like www.photojojo.com and www.cameralends.com renting out simple systems. There also a couple of companies sitting in the wings (www.dronerental.com) with an eye on Ag and industrial applications. We can see that down the line you may well be able to rent or lease sophisticated aerial systems for mapping and inspection work without the need to develop an in-house infrastructure to manage the assets.

In conclusion 2015 is going to be an interesting year. There is still plenty of interest in the use of unmanned systems for a multitude of practical civilian applications and hopefully the FAA will be put under sufficient political pressure to release common sense regulations for small systems that pose the least risk to manned aviation when operated in non-urban areas.