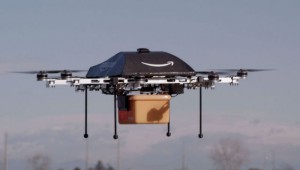 Many people remain skeptical about the feasibility of a UAV delivery service, we at The Best Drone Info are not among that group.  It is our belief that drones/UAVs of the future will provide a viable solution for delivery of some types of products, especially in high-population-density areas where warehouses are geographically close to the population.

We are excited to see that the FAA has given Amazon permission to carry out research in this area.  Read more in this article from .

“Amazon is a step closer to realising its dream of utilising unmanned air vehicles in its delivery service, following the Federal Aviation Administration’s award of an experimental airworthiness certificate to the company to carry out research that would contribute to its envisioned Prime Air offering.

Issued for a UAV design developed by the Amazon Logistics division of the company, the certificate will allow it to carry out research and development and crew training at altitudes of 400ft and below, during daylight hours, and in visual meteorological conditions.

Amazon first detailed its desire to deliver parcels by UAV in December 2013, when chief executive Jeff Bezos announced that the firm would enhance its Prime delivery service with the use of rotary-wing UAVs.

Since then Amazon has fought with the FAA for permission to carry out research into this area in national airspace – even going so far as to write to the FAA in July 2014 to call for an exemption on restrictions, which seemingly has now been granted.”