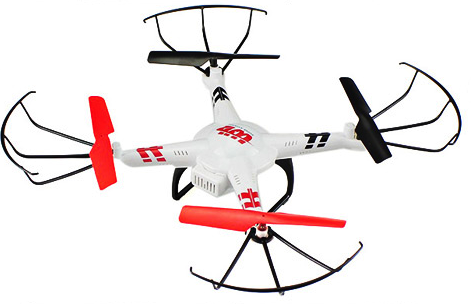 Looking for a review of the WLtoys V686G FPV drone?  You have come to the right place for a complete review of this drone.

Our friends at Skylab Flight Systems are bringing us another review, this time of the WLtoys V686G FPV drone. The team at Gearbest.com provided them with the drone to review.

We would really like to hear your comments, constructive please, and suggestions.  If you have any, please leave them in the comment section below.

For those of you that prefer to read about products or want to know more than what we show in the video review, please look below for the written, more in depth version!  Be sure to visit gearbest.com to view their selection of toy drones!

Brought to you by: Skylab Productions via Huzzaz

Let me go into a little more detail about the WLtoys V686G drone than I did in the video.

The package from Gearbest.com arrived much faster than I expected.  I thought for sure I would have to wait a couple of weeks or more but the people at Gearbest.com use DHL to ship their products to EVERYONE.  So, I received the package 5 days after it was shipped from China.  That is fast shipping considering the distance traveled.  I opened the box about 3 minutes after signing for it and inventoried the contents.  The WLtoys V686G came with the radio transmitter, the drone itself, a bag that contained a microSD card reader, a USB charger for the included monitor and smaller bag with screws and screw driver.  Also included was a full set of propellers (both front & back), propeller guards, the drone battery and charger as well as the monitor mounting bracket and thumb screws.

I plugged the battery into one of my chargers and then, using the USB charging cable, plugged the monitor into my PC so it could charge.  While those two items were charging, I decided to install the propeller guards  These are a nice thing to have, especially if you are new to flying drones or plan to fly indoors only.  Once installed, they will prevent the propellers from striking anything that the drone comes close to like walls, pets and other people.  Each prop guard attaches to the frame using 3 small screws.  The screws are SMALL so be careful not to lose them when installing the prop guards.  Once they were installed, I decided to have a look at the included radio transmitter.  It requires 6 AA batteries to operate so I installed some fresh AAs from my stock and turned on the radio.  I was met with a tone that indicates it is searching for the drone to make a connection.  The screen lights up blue and shows the functions and a diagram of the drone itself.  I show that in the video above if you would like to see.  After all of this, the battery and monitor were charged.

I decided to mount the FPV monitor to the radio transmitter before giving the drone a go for the first time.  The included mounting instructions are pretty clear about how to attach the monitor the radio.  There is a bracket that attaches to backside of the radio.  Then, the monitor slips over the radio antenna and, using the included thumb screws, is secured to the bracket.  It attached quickly and easily.  Now I was ready to give the V686G a go for the first time.

Normally, with most things RC, you turn on the radio THEN turn on whichever vehicle you might be trying to operate.  That is NOT the case with the V686G.  You must first plug the battery into the drone and THEN turn on the radio in order for it to make the proper connection.  After doing this, the drone lights come on and the radio beeps as it makes the connection.  At this point, the drone is ready to fly.  The drone powers up the first time allowing the user to use only 40% of the throttle and the controls.  This is designed for people new to drones.  The operation is slow, but smooth.  As you gain skill and confidence, you increase the percentage by 20% until you reach 100%.  I recommend staying with 40-60% as the drone can be a handful at the higher rates.  Before initiating my first flight, I turned on the FPV monitor and was welcomed with a view of my shop from the camera’s point of view.

I decided the first flight would happen in my shop.  I placed the drone on the floor and eased the throttle up until the drone was airborne.  This drone does not come with GPS.  What does that mean?  Well, simply put, it means that the drone will drift left/right/front/back until you have applied the proper trim so that it almost hovers in place.  Please see the included manual for this function as it does a pretty good job instructing you how to apply which trim.  Once trimmed out, the drone is actually pretty stable.  It requires the user to give it input to move in any direction.  This will teach someone new to drones how to fly a drone in what most people call MANUAL mode in the larger, more advanced drones.  The radio is small but feels good in the hands even with the monitor attached to it.  It feels balanced rather than heavy on one side or another.  The monitor works rather well too.  I was seeing exactly what the camera was looking at.

I started to fly around the shop some and decided it was time to start recording my flight.  To initiate recording, you press the button on the top left side of the radio.  The numbers on the screen, which indicates how long you can record, will turn red when recording.  While in flight, you can also snap still photos as you see fit.  This drone has a 5mp camera but the photos come out surprisingly clear considering the size and cost.  Flight time in the shop was about 7 minutes before the battery hit the low voltage point.

I turned all of the components off and put the drone battery back on the charger.  The wait for another charge using the included charger is not indicated in the instructions but I would expect it to be in the 2 hour range or less.  I decided to wait to fly again until I had good weather to do so.  Lately, we were getting rain or groups of thunderstorms almost every day.

It was another 3 days before I was able to fly the drone outside.  Because I needed to get some footage of the drone flying, I enlisted the help of Dino to pilot the drone outside while I filmed it flying.  Dino was a pro, of course.  Take off was nice and smooth, as you can see in the video above, and the controls were smooth according to Dino.  He was soon flying all over the area outside of the shop and laughing almost the entire time!  He stated the drone makes you really fly it by constantly giving it input but was a blast to fly!  He initiated the recording function on the drone’s camera and recorded most of his flight and snapped a still photo of me filming the action (seen below).  The last thing that Dino and I decided to test was how well the drone would do in wind.  The wind was blowing at about 5 mph with 8 mph gusts.  Dino flew straight into the wind using 100% power and the drone did not want to move forward.  The wind was just too much for it.  That is ok as it is not built to be that kind of flyer.  So, when flying outside, avoid windy days.  The range of the radio was perfect for the drone’s size and allowed Dino to make use of the medium sized grassy area outside of our shop.  He never lost radio contact NOR did the FPV screen lose recption.  The box lists an automatic return function.  Dino and I tried this on two separate occasions and each time the drone just landed.  Again, not a surprise as this isn’t one of the advanced, GPS enabled models that sell for $1000+.

Since filming Dino flying the drone, I’ve flown another 4 batteries through it and had a blast doing it too!  It’s durable and handles crashes very well.  The plastic has just enough give to allow the drone to bounce rather than snap when it hits an object or the ground.  This is a selling feature in my opinion as this makes for a great trainer and an incredibly affordable introduction into FPV at a price of $104.67!  Speaking of FPV, for those of you that are new to drones, I recommend that you spend the first few flights getting used to the drone before trying to use the FPV monitor.  It can be distracting when you are flying in tight quarters.

I think that this drone makes for a great trainer aircraft for someone new to drones and it’s a fun drone to add to your collection if you’re an experienced operator!  I would recommend this for the young and curious.  With a little help from mom or dad, it will be up in the air in no time!  To purchase this exact model for yourself or for someone that wants to get into drones, please click HERE.

Thank you very much to Gearbest.com for providing us with the opportunity to review this fun little drone!  Make sure you visit their site (CLICK HERE) to see EVERYTHING they have to offer!